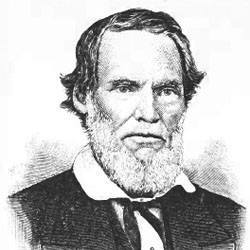 Robert E. B. Baylor (1793-1874) Freemason, American jurist and Baptist clergyman. Baylor University at Waco, Texas named for him. Born May 10, 1793 in Lincoln Co., Ky. He was the only son of Walker Baylor, who commanded Washington’s life guards at the Battle of Germantown. Served in the War of 1812 under Col. Boswell and was in the fight near Fort Meigs. Returned to Ky. after the war and acquired a large law practice.

In 1819 he was elected to the state legislature, but moved to Alabama the following year. Was elected to the Alabama legislature in 1824 and elected U.S. congressman from Alabama to the 21st congress, serving from 1829-31. During the Creek War he commanded a regiment of Alabama volunteers. Moving to Texas in 1839, he became associate justice of the Texas Supreme Court from 1841-45 and U.S. district judge, 1845-61.

He was instrumental in obtaining the charter for the first Baptist college in Texas, and gave considerable land and money to it. Chartered at Independence, Texas, it later was moved to Waco. This prominent university bears his name, as does one of the counties of Texas. He was a member of Baylor Lodge No. 125 at Gay Hill, Washington Co., Texas, and of Murichson Chapter No. 18, R.A.M. of La Grange, Texas. At one time he served as grand chaplain of the Grand Lodge of Texas and of the Grand Chapter, R.A.M. of Texas. Died Jan. 6, 1874 ‪#‎gilavalleylodge9‬ ‪#‎historicflorenceaz‬ ‪#‎coolidgeaz‬ ‪#‎santanvalley‬ ‪#‎queencreekaz‬ ‪#‎freemasonry‬ ‪#‎masonictrivia‬ Baylor University