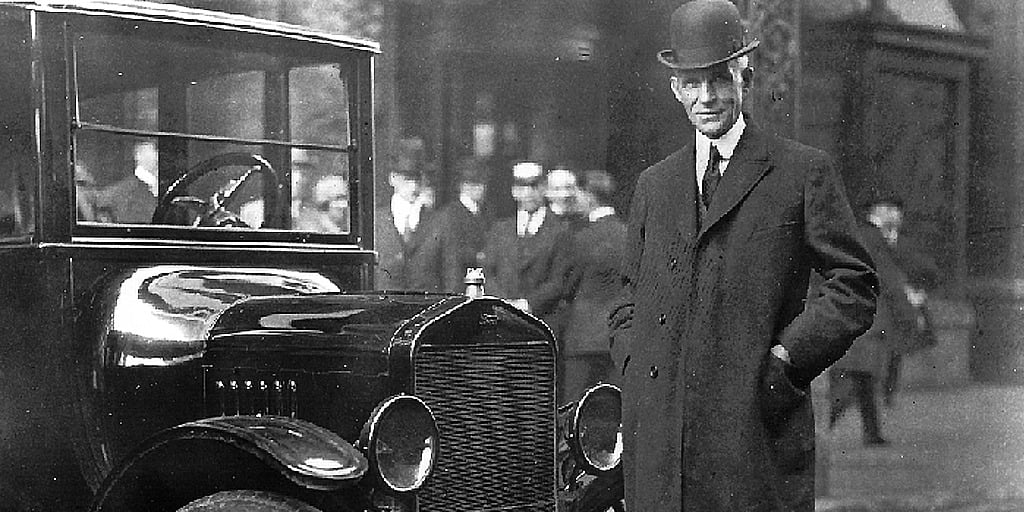 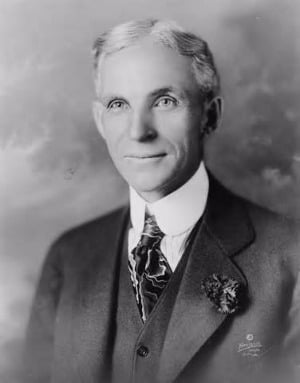 The story of Henry Ford is not of a prodigy entrepreneur or an overnight success. Ford grew up on a farm and might easily have remained in agriculture. But something stronger pulled at Ford’s imagination: mechanics, machinery, understanding how things worked and what new possibilities lay in store. As a young boy, he took apart everything he got his hands on. He quickly became known around the neighborhood for fixing people’s watches.Henry Ford’s parents left Ireland during the potato famine and settled in the Detroit area in the 1840s. Ford was born in what is now Dearborn, Michigan on July 30, 1863. His formal education was limited, but even as a youngster, he was handy with machinery. He constructing his first steam engine (1878) at the age of 15. He became a machinist’s apprentice in Detroit at the age of 16.

In 1888, Henry Ford married Clara Bryant and moves to an 80-acre farm in what is today Dearborn. Five years later their only child Edsel Bryant Ford is born. From 1891 to 1899 he was a mechanical engineer, and later chief engineer, with the Edison Illuminating Company. In 1893 he built his first internal combustion engine, a small one-cylinder gasoline model.

In 1896, Ford invented the Quadricycle. It was the first “horseless carriage” that he actually built. It’s a far cry from today’s cars and even from what he produced a few years later, but in a way it’s the starting point of Ford’s career as a businessman. Until the Quadricycle, Ford’s tinkering had been experimental, theoretical—like the gas engine he built on his kitchen table in the 1890’s, which was just an engine with nothing to power. The Quadricycle showed enough popularity and potential that it launched the beginning of Ford’s business ventures.

In 1899 Ford left Edison to help run the newly formed Detroit Automobile Company which produced only a few cars. Ford quit Detroit Automobile Company and began to build his own racing cars. In 1901, the Henry Ford Company is organized with Ford as chief engineer. Cars were still built essentially one at a time. Ford hoped to incorporate ideas from other industries — standardized parts as Eli Whitney had used with gun manufacturing and George Eastman tried in photo processing — to make the process more efficient. This idea struck others in his field as nutty, so before long, Henry resigned in a dispute with his financial backers. In 1902, the company becomes the Cadillac Motor Car Co.

His own racing cars were good enough to attract backers and even partners, Ford Motor Company was founded on June 16, 1903. The first Ford, the Model A, was being sold in Detroit a few months later. When founded, Ford Motor Company was just one of 15 car manufacturers in Michigan and 88 in the US. But as it began to turn a profit within its first few months, it became clear that Henry Ford’s vision for the automotive industry was going to work, and work in a big way. During the first five years of Ford Motor Company’s existence, Henry Ford, as chief engineer and later as president, directed a development and production program that started in a converted wagon shop.

As with most great enterprises, Ford Motor Company’s beginnings were modest. The company had anxious moments in its infancy. Beginning in 1903, the company began using the first 19 letters of the alphabet to name new cars. The earliest record of a shipment of a Model A is July 20, 1903, approximately one month after incorporation, to a Detroit physician. With the company’s first sale came hope—a young Ford Motor Company had taken its first steps.

Henry Ford’s insistence that the company’s future lay in the production of affordable cars for a mass market caused increasing friction between him and the other investors. As some left, Ford acquired enough stock to increase his own holdings to 58.5 percent. Henry Ford became president in 1906, replacing John S. Gray, a Detroit banker who had served as the company’s first president.

In 1907, Henry Ford announced his goal for the Ford Motor Company: to create “a motor car for the great multitude.” At that time, automobiles were expensive, custom-made machines. Ford’s engineers took the first step towards this goal by designing the Model T, a simple, sturdy car, offering no factory options — not even a choice of color. 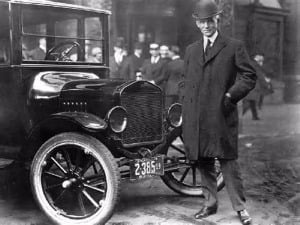 He still met resistance to his ideas for mass production of a car the average worker could afford. But he stuck to his goal and finally in 1908, began production of the Model T. The company began selling his famous Model T for $850 each. The Model T was inexpensive for its day, and proved to be sturdy, reliable and easy to operate. It quickly became very popular; and soon Ford found he was unable to meet the enormous demand for his cars.

Ford’s solution was to invent a moving industrial production line. By installing a moving belt in his factory, employees would be able to build cars one piece at a time, instead of one car at a time. This principle, called “division of labor,” allowed workers to focus on doing one thing very well, rather than being responsible for a number of tasks.

Ford gradually adapted the production line until in 1913, his plant incorporated the first moving assembly line. Demand for the affordable car soared even as production went up: before Ford stopped making the model T in 1927, 15 million had been sold, and Ford had become the leading auto manufacturer in the country. In addition to the moving assembly line, Ford revolutionized the auto industry by increasing the pay and decreasing the hours of his employees, ensuring he could get enough and the best workers. During the Model T era, Ford bought out his shareholders so he had complete financial control of the now vast corporation. He continued to innovate, but competitors (growing more powerful though fewer in number) began to cut into Ford’s market share. 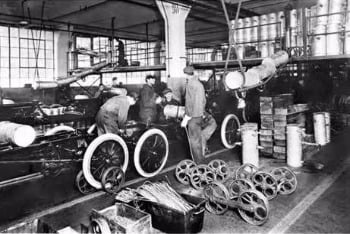 Perhaps Ford Motor Company’s single greatest contribution to automotive manufacturing was the moving assembly line. First implemented at the Highland Park plant (in Michigan, US) in 1913, the new technique allowed individual workers to stay in one place and perform the same task repeatedly on multiple vehicles that passed by them. The line proved tremendously efficient, helping the company far surpass the production levels of their competitors—and making the vehicles more affordable.

By early 1914 this innovation, although greatly increasing productivity, had resulted in a monthly labor turnover of 40 to 60 percent in his factory, largely because of the unpleasant monotony of assembly-line work and repeated increases in the production quotas assigned to workers. Ford met this difficulty by doubling the daily wage then standard in the industry, raising it from about $2.50 to $5. The net result was increased stability in his labor force and a substantial reduction in operating costs. These factors, coupled with the enormous increase in output made possible by new technological methods, led to an increase in company profits from $30 million in 1914 to $60 million in 1916.

Ford found his new system produced cars quickly and efficiently; so efficiently that it considerably lowered the cost of assembling the cars. He decided to pass this savings along to his customers, and in 1915 dropped the price of the Model T from $850 to $290. That year, he sold 1 million cars.

Instead of constant turnover of employees, the best mechanics in Detroit flocked to Ford, bringing in their human capital and expertise, raising productivity, and lowering training costs. Ford called it ‘wage motive.’ The company’s use of vertical integration also proved successful, as Ford built a gigantic industrial facility on the Rouge River in Dearborn, Michigan that shipped in raw materials and shipped out finished automobiles.

Ford became interested in politics and as a successful and powerful business leader, was sometimes a participant in political affairs. In 1915, he funded a trip to Europe, where World War I was raging. He and about 170 others went — without government support or approval — to seek peace. The war lasted another three years. After the war Ford ran unsuccessfully for the Senate on the Democratic ticket. He never ran again, but was always outspoken on political subjects.

The years between the world wars were a period of hectic expansion. In 1917, Ford Motor Company began producing trucks and tractors. In 1919 a conflict with stockholders over the millions to be spent building the giant Rouge manufacturing complex in Dearborn, Michigan led to the company becoming wholly owned by Henry Ford and his son, Edsel, who then succeeded his father as president.

The famous Ford Model T automobile ended production in 1927. During its production run from 1908 to 1927 over 15,000,000 Model T’s were produced.. It is generally regarded as the first affordable automobile, and the car which “put America on wheels”.

He violently opposed labor organizations and actively worked against the United Auto Workers trying to unionize his plants. After the “Battle of the Overpass” occurred between Ford security staff and United Auto Workers union, Ford began serious negotiations with the UAW and a contract was signed in 1941.

Ford suffered an initial stroke in 1938, after which he turned over the running of his company to his son Edsel. Edsel’s 1943 death brought Henry Ford out of retirement. In ill health, he ceded the presidency to his grandson Henry Ford II in September 1945, and went into retirement. He died in 1947 of a cerebral hemorrhage at the age of 83 in Fair Lane, his Dearborn estate, and is buried in the Ford Cemetery in Detroit.

Ford Motor Company started the last century with a single man envisioning products that would meet the needs of people in a world on the verge of high-gear industrialization.  he company is beginning its second century of existence with a worldwide organization that retains and expands Henry Ford’s heritage by developing products that serve the varying and ever-changing needs of people in the global community. When Henry Ford started building the Model T on an assembly line, he didn’t just revolutionize the fledgling automobile industry–he changed the world.

Henry Ford was the founder of the Ford Motor Company and father of the modern assembly line used in mass production. His introduction of the Model T automobile revolutionized transportation and American industry. As sole owner of the Ford Company he became one of the richest and best-known people in the world. Ford and his family spent a good deal of time and money on charitable work. They set up an historical museum in Greenfield Village, Michigan, and most notably set up the Ford Foundation, which provides grants for research, education, and development.