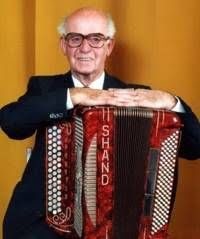 Jimmy Shand was born in East Wemyss, Fife, on January 28th, 1908. Jimmy’s first musical instrument was the moothie or mouth organ, before his father,himself a skilled melodeon player, taught him to play at an early age, and when the 14-year old had to leave school to go down the mineshafts, he played his melodeon at social events, weddings, and competitions. In his mid-twenties, Jimmy started a job in a music shop in Dundee and switched to the chromatic button-key accordion, the instrument he stuck with for the rest of his life.

In 1955 he recorded the hit single “Bluebell Polka” which reached number 20 in the charts and earned him an appearance on a BBC television “Pop Music” programme. He went on to sell millions of records during a musical career spanning more than 70 years. In 1999 he received a knighthood for his services to Scottish culture at the Palace of Holyroodhouse,Edinburgh by Prince Charles, the Prince of Wales

Jimmy was truly a very rare Scottish national treasure. A statue in his memory has been erected in his adopted town of Auchtermuchty in Fife. There is a commemorative plaque on the statue which has an inscription that should be familiar to all Scottish Freemasons;

Jimmy Shand was a member of Lodge Robert De Bruce No. 304 Ladybank, Fife