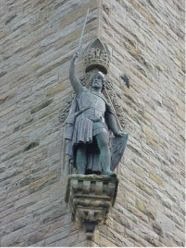 One of Scotland’s most accomplished sculptors, David Watson Stevenson was born in
the village of Ratho, 5 miles to the west of Edinburgh. Stevenson trained at the Trustee’s school, Edinburgh and was an apprentice in the studio of the sculptor William Brodie (1815-81).

After winning a South Kensington National Prize for a statuette of the Venus de Milo, he completed his studies in Rome and returned to assist Sir John Steell on the Prince Albert Monument, Edinburgh, for which he executed the groups representing Science and Learning (1865-76).

Perhaps his best known work is the bronze statute of William Wallace at the Wallace Monument near Stirling situated 30 feet off the ground and standing 15 feet tall. He also sculpted all but two of the marble busts in the ‘Hall of Heroes.’ What is not well-known, is that there is an exact replica of the statute in Druid’s Hill park in Baltimore, USA.

David Watson Stevenson was initiated into Freemasonry in Lodge Dramatic and Arts in Edinburgh, and after receiving honorary membership of Lodge Kirknewton and Ratho No. 85 in 1889, he presented to the Lodge, busts of Sir Walter Scott and Robert Burns.