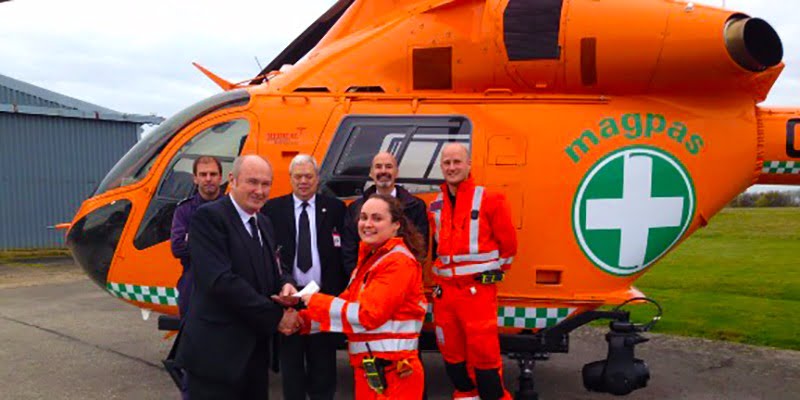 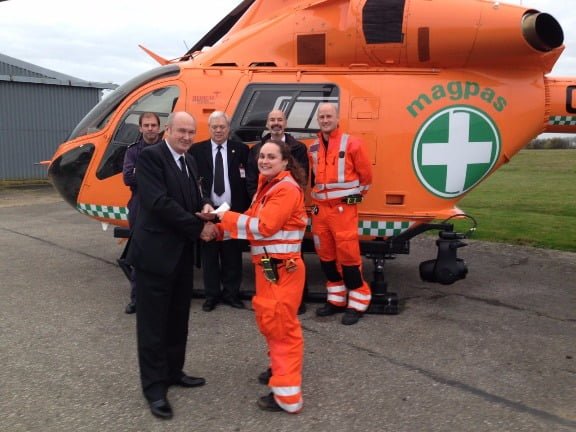 Members of St Guthlac Masonic Lodge made the journey to RAF Wyton to visit the Magpas Air Ambulance Operations Base last week, after the charity was successfully nominated to receive a donation of £500 from the New Provincial Benevolent Fund of the Masonic Province of Lincolnshire.

WBro Coomber, Bro Coneybear and Bro Andrews-Mead were given a tour of the Operational Base, where the group learnt how the charity works and were able to have a look around the helicopter. The Mason members then had the opportunity to meet the Magpas Doctor and Paramedic on shift that day, along with the Helicopter Crew, who explained to the group all about a ‘day in the life’ of a Magpas team member.

As the afternoon drew to a close, the emergency alarm sounded across the base. The Magpas team got kitted up and within no time they were up in the air and on the way to provide specialist medical care to someone in a serious emergency.

After their visit to the Magpas Air Ambulance Base, WBro Coomber said, “What surprised us the most was how many medical professionals give up their own time to volunteer for this charity, with the Doctors and Paramedics coming from neighbouring counties and even further afield. Their dedication and professionalism is an inspiration and they rarely get the recognition they deserve.”

Bro Coneybear added, “The opportunity to learn about the vital work that Magpas carries out was not to be missed. The £500 donation is being put to very good use, yet this is just a drop in the ocean of the 4 million pounds needed annually to keep the charity flying.”

Debbie Florence, Head of Fundraising at Magpas, said, “It was brilliant to meet the members of the St Guthlac Masonic Lodge and we’re very grateful for the donation. Their support will help us continue to provide lifesaving care by land and air, in the East of England and beyond.”