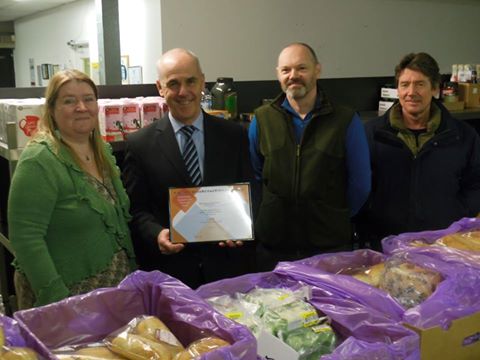 Recently The Masonic Charitable Foundation gave a £2,000 grant to The Devon & Cornwall Food Action Association (Plymouth Branch); a charity reflecting the need to link food waste with food poverty, and they were visited by the Deputy Provincial Grand Master of Devonshire V. W. Bro. Nicholas Ball.

Nicholas Ball met up with Jackie Young their manager, along with some of the volunteers who help run this invaluable organisation and presented them with a certificate to recognise their hard work and dedication.

Established in 2010, DCFA is a registered charity that intercepts surplus food and redistributes it to a partnership network of local charities and community organisations. In this way they are able to address the issue of food poverty in some of the Southwest’s most vulnerable communities. They are not a food bank as they do not supply individuals but they have three hubs in Exeter, Plymouth and Cornwall with mini hubs in Falmouth, Liskeard, Newquay, Callington and Bude.

The food they rescue would otherwise be sent to landfill or to a local waste to energy plant for incineration. They have successfully rescued over 220 tons of food worth over £1 Million since they started. Working with over 60 suppliers such as Sainsbury’s, Tesco and Fareshare a Uk wide food surplus charity, they can help their partners support up to 3,000 vulnerable people each week.

Jackie tells us that they are totally reliant on grants, donations and sponsorship to be able to survive which is why the £2,000 from the Masonic Charitable Foundation is so welcome. She explained that each hub is responsible for raising their own funds and that the General Manager is the only full time paid job but they are supported by over 150 volunteers.

The annual cost of running each hub is over £15,000 with another £24,000 to maintain the core activities which is why the General Manager who has a fundraising background is so important to the DFCA.

Nicholas Ball when presenting the certificate said “With the threat of increasing food poverty for the foreseeable future, whilst it should not be necessary for such organisations as the DCFA to exist, thank goodness they do. The care and dedication shown by Jackie, Jimmy and Paul along with their troop of willing volunteers shows there is compassion in abundance here in the Southwest, which is why we are so happy to play our part to ensure their good work can continue”.