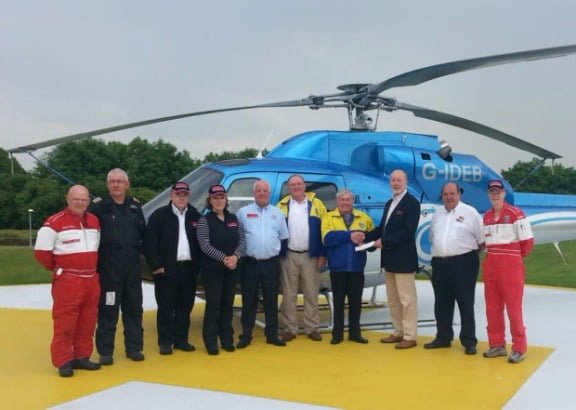 Dr David Stevens, fourth from right, receives the cheque from Keith Dalrymple, of the Freemasons

The Rob Vine Fund has again been a grateful beneficiary of the Freemasons’ Air Ambulance Grand Charity fund.

Keith Dalrymple, on behalf of the Freemasons, presented a cheque for £4,000 to Dr David Stevens, one of the Rob Vine Fund directors.

Dr Stevens said: ‘Last year we spent nearly £40,000 on two specialised monitor/defibrillators for the two helicopters and this brilliant repeat donation will help to offset the original cost involved.’

The charity, which was founded in memory of Rob Vine who died in an accident at Black Dub during the 1985 Senior TT, provides a range of medical equipment used around the TT course.

In addition, general donations to the charity help to fund the orange immediate care cases at more than 110 marshalling points on the mountain course, as well as scoop stretchers and head rests. During the past 30 years the fund has also included in its remit the training of doctors, paramedics and marshals involved in motorsport in the Isle of Man.

Dr Stevens said the Rob Vine Fund always needs an extensive fundraising programme, which has to raise around £25,000 per year to ensure all items are replaced when needed and to keep up with current best medical practice.