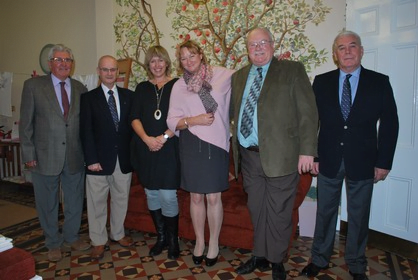 Freemasons in Herefordshire have again demonstrated their support for Breast Cancer Haven by donating a further £1,437 to the Hereford Haven. This donation comes from two Lodges meeting in Hereford. £837 was donated by Dean Leigh Masters’ Lodge. The Master of Dean Leigh Masters’ Lodge this year is the Rev David Bowen, Provincial Grand Master for Herefordshire. He is a longstanding supporter of the Haven, and made many pastoral visits during his years in Ministry.

The other £600 came from Dean Waterfield Lodge. Keith Farmer, as Master of the Lodge 2015-2016, selected the Haven as one of his charities. The Province is also part of the Haven’s Guardian Scheme.

The donation was made during a visit to Hereford Haven by Pam Healy OBE, the Chief Executive of the organisation nationally. She expressed her gratitude to local Masons, as did Frankie Devereux, Hereford Fundraising Manager. The money will support building restoration work at the Hereford premises, part of a five year maintenance plan.

The Haven provides a wide range of support services to women, and occasionally men, who are affected by breast cancer. It is a successful and expanding organisation, and will open its sixth centre in Solihull next year.